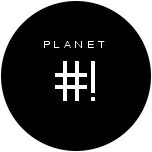 Linux distros are turning to the live CD as a way to introduce themselves. Some of the best live CD’s come from lesser-known projects, many of whom re-master a leading distribution to create a smaller, less memory-hungry operating system. This article takes a look at my favorite distros that can run acceptably in as little as 256mb of RAM (after installing them to your hard drive). If you’ve tried, say, Xubuntu and found it too sluggish, these candidates are worth exploring. I’ve used all of them in a Pentium 3 laptop as well as in Virtualbox.

I refuse to pick a winner. Instead, I’ve tried to summarize the virtues of each one. In no particular order, my top five minimal distros are: 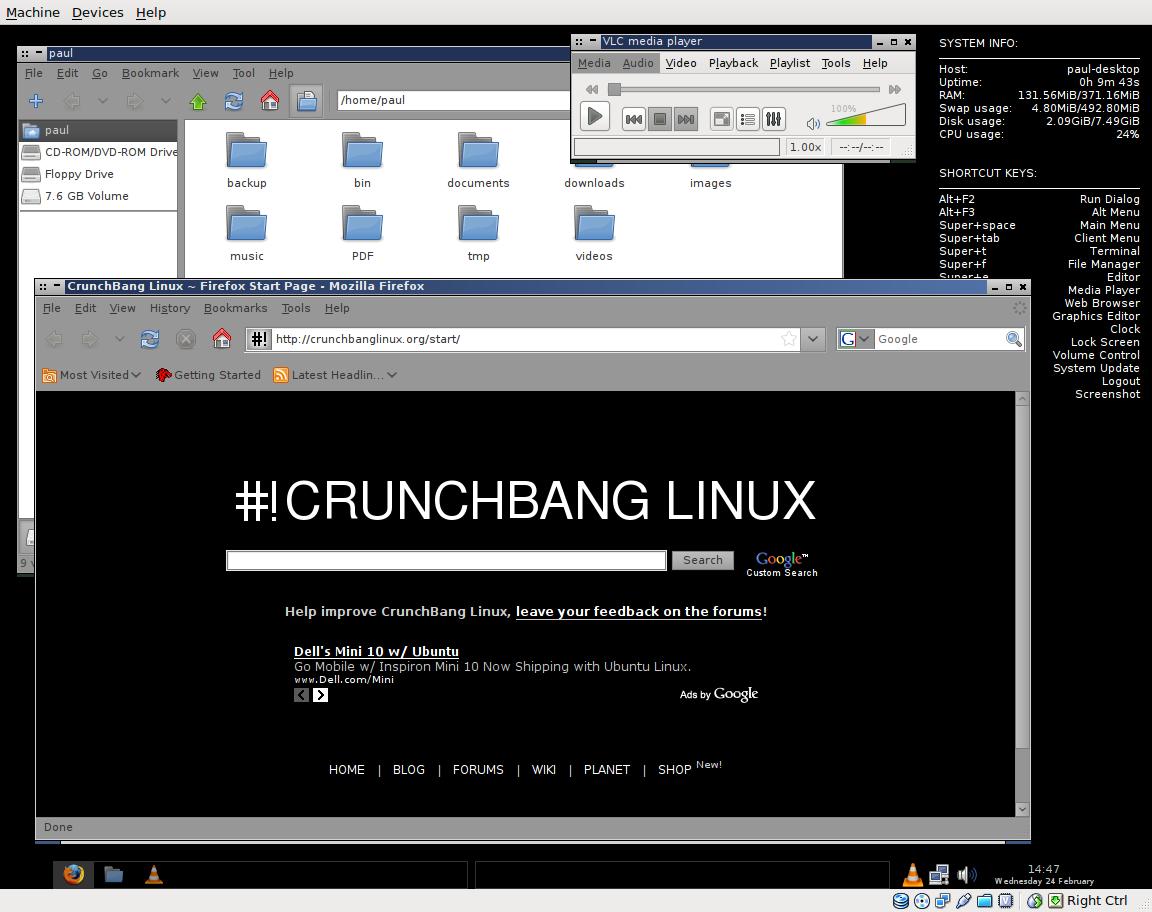 Crunchbang Linux is a derivative of Ubuntu. It replaces Ubuntu’s memory hogging Gnome desktop with the Openbox window manager. It uses around 65mb RAM on bootup (as measured by utilities like htop or free). That’s significantly less memory than Xubuntu, too. Crunchbang’s no-nonsense desktop defaults to a pure black background, but this distro’s appeal shouldn’t be limited to goths and geeks. Icons along the bottom task bar show you graphically what’s running and the status of your network connections. Instead of reaching down to the taskbar, however, you launch applications with a RMB click, with your most commonly used applications just one more click away.

Crunchbang’s latest release is 9.04, and comes in a regular and “lite” edition. Unless you’re severely short on hard drive space, I suggest installing the regular. The Live CD has the usual apps you’d expect: Firefox, Abiword, FTP and Bittorrent clients. In addition, it comes with a large assortment of useful internet and multimedia utilities, such as VLC, Skype, Rhythmbox, Audacity, Kino, Pidgin, Inkscape, and GIMP. Console enthusiasts will love the inclusion of Vim, Mutt, and Midnight Commander.

Summary: Crunchbang is perfect if you want Ubuntu without the bloat, and especially if you need a multimedia-complete install. 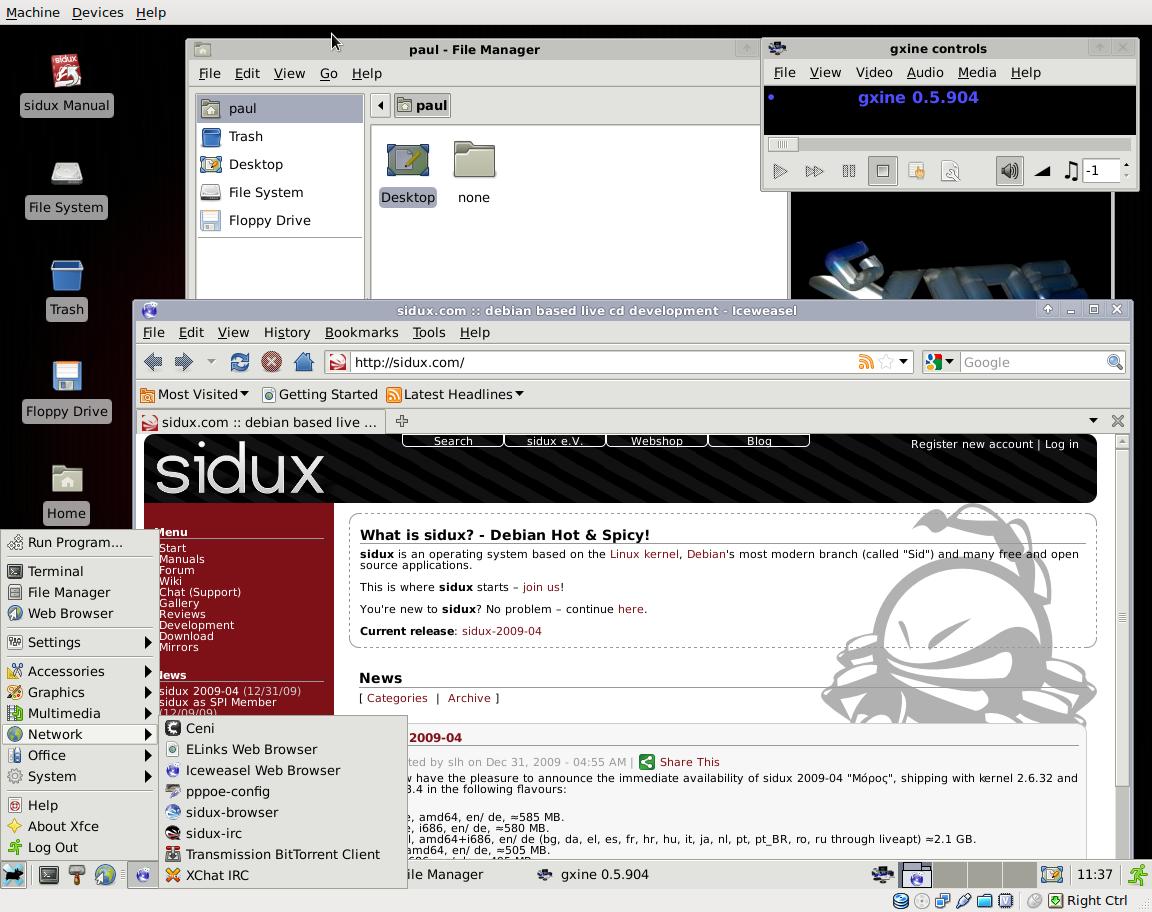 Sidux is a bleeding edge distro that follows Sid, the Debian “unstable” branch. Don’t let the unstable part deter you, though. I haven’t encountered any serious problems with it. Sidux boots very quickly and consumes less than 60mb RAM on bootup – truly impressive when you consider it’s running the XFCE desktop. I’ve tried other distros using XFCE (Xubuntu, Fedora, OpenSUSE). All of them use significantly more RAM after booting (110-140mb).

Sidux is regularly updated. The release I installed (2009.4) has the 2.6.32 kernel. One advantage of tracking the latest branch is access to recent multimedia codecs and libraries. I had no trouble installing music clients for Pandora and LastFM.

Summary: Sidux is suited to you if you prefer XFCE or want to run the latest packages. 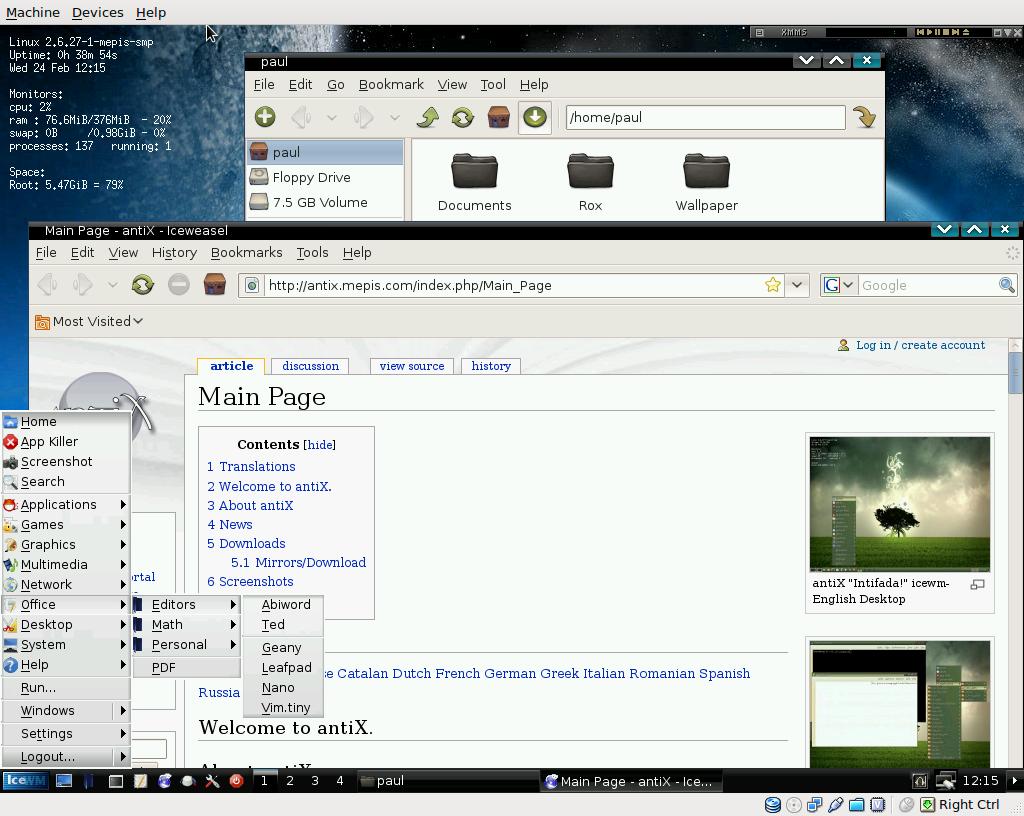 Mepis has at least two products with minimal resource demands. The first, AntiX, is a Mepis community distribution featuring the IceWM window manager. After installing it to your hard drive, it uses barely 50mb of RAM. Conky shows your resource usage on the desktop; file management is provided by PcManFM, and web browsing is courtesy of the Iceweasel (unbranded FireFox) web browser. For documents, AntiX gives you the Abiword word processor, and a choice of several text editors including my favorite, Geany. You can add tons more from the Mepis or Debian repositories.

While you’re testing AntiX, I recommend you also check out Mepis’ main offering, SimplyMepis, which employs the KDE 3.5 window manager. Its RAM appetite is barely higher (about 75mb on bootup), and KDE gives it a more polished feel. The Mepis installer and configuration tools are among the best, giving you limited but clear choices.

Summary: Either version of Mepis is right for you if you want a Debian mainstream experience, or you miss the “old” KDE. 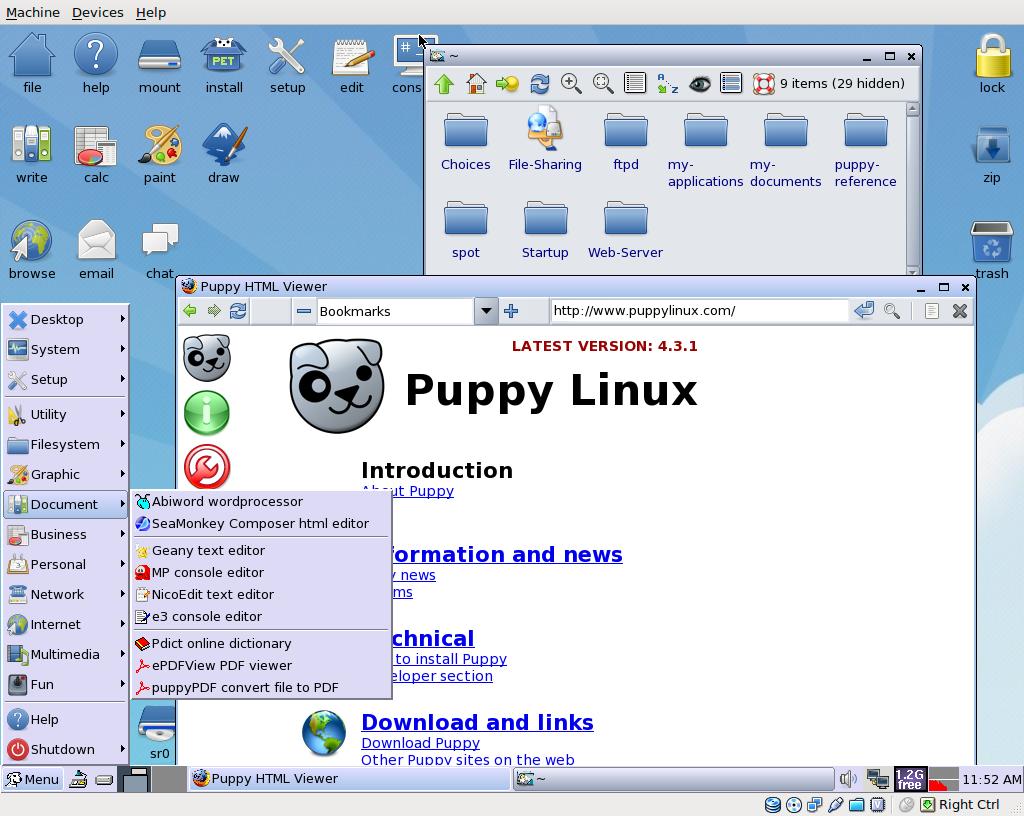 Puppy Linux is perhaps the most innovative of all the Linux distros that even your grandmother could use. Puppy loads fast enough from its Live CD that you may not even have to install it to a hard drive. If you do install it, you don’t have to reserve a partition. Puppy’s “frugal installer” will place the entire system into a single file in a Linux or Windows partition. Moreover, if you have enough memory (256mb or more), Puppy can copy the contents into RAM, giving you blazing speed even on an older CPU (and freeing your DVD/CD drive for other things). Puppy saves the files and settings you create to a virtual drive while you work and can write them to a single file on a USB stick or hard drive in the background. All of this makes a Puppy CD or USB drive perfect for carrying around, whether for travel or troubleshooting.

Puppy’s menu system and applications are also different from most distros. Although it gives you standard apps like Firefox and Abiword, Puppy offers its own utilities for managing internet connections, mounting partitions, and accessing SMB network shares. Puppy uses the ROX file manager, which is lightweight but not as intuitive to use as tree-based file browsers like Nautilus, Thunar, or PcmanFM. Puppy may not become your favorite flavor of Linux; however, it’s worth having in your toolkit.

Summary: Puppy is your dawg if speed is your top priority and you don’t need access to the DEB/RPM software universe. It’s also best for really ancient computers or for introducing someone to Linux without messing with their hard drive partitions. 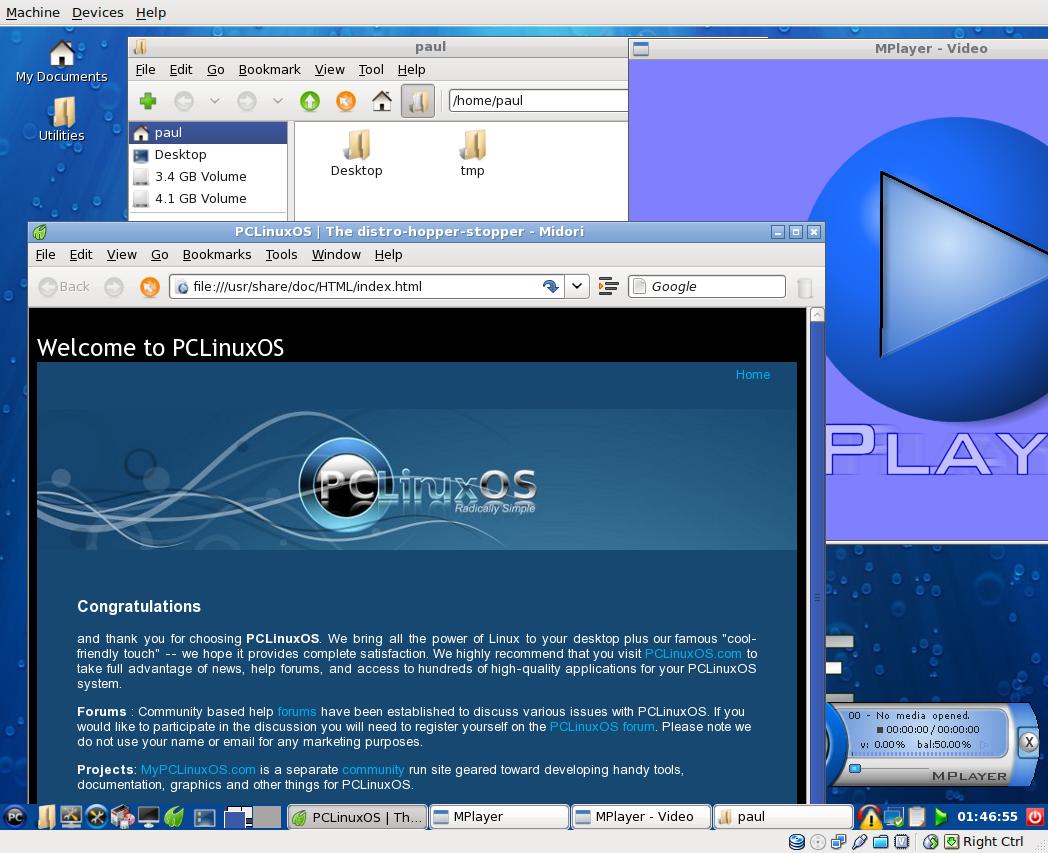 The LXDE spin, once installed to your hard drive, weighs in at around 85mb of RAM. As the name MiniMe suggests, it follows the minimal install tradition of giving you one application per task. It includes the Midori web browser, SciTE and Abiword for text editing and writing, Mplayer for multimedia, and PcmanFM for file management. Ubuntu users will be comfortable installing additional packages, thanks to the Synaptic package manager which acts exactly as a Debian user would expect. Like Ubuntu, PcLinuxOS automatically connects to its repositories and reminds you when updates are available.

Based on Mandriva Linux, PcLinuxOS shares Mandriva’s beautiful configuration tools and has perhaps the most attractive user UI of any of the distros reviewed here. The LXDE desktop, fonts, and background are an improvement over the crude look you get when you install the LXDE environment within Ubuntu or Debian.

Summary: If out-of-the-box aesthetics matter and you want the best-looking LXDE desktop, opt for PcLinuxOS LXDE.

I hear the cry: where’s Arch Linux, or any variant of Slackware? I admit that I didn’t particularly like their installers or package managers by comparison with Debian, Ubuntu and Mandriva derivatives. I’ll try to give them a fair shake in a future article.

Virtualbox as a Remote Desktop Server